Gran Paradiso (4061m) is the highest Italian peak situated entirely in Italy. This sounds a little bit strange as there are a few more peaks on the border which are much higher. 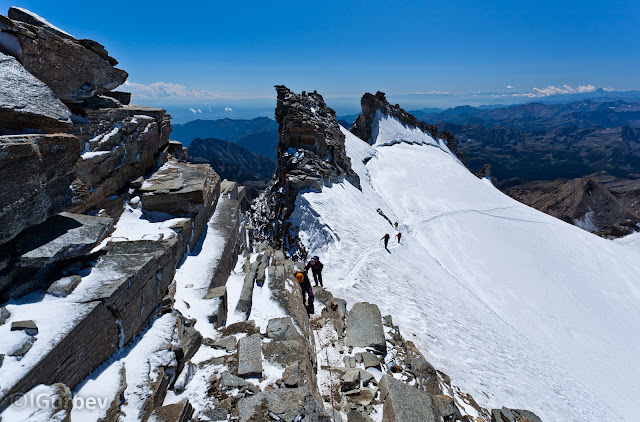 In a few words here is the story:
We intended to go to Bernina after Marmolada, but after series of bad luck (first the traffic jams in Kanazei, then a motorcycle crush blocked the road and after a long wait we turned to look for bypass roads) we arrived at the start point Campo Moro late in the afternoon where it was starting to rain. We planned to be at the first hut (Refugio Carate - Brianza) the same day.
After having checked the forecast, it turned out that nothing good was expected the next few days. So we decided to change plans and go south to Gran Paradiso with the hope to avoid the bad weather. We were lucky. The day we climbed was great.

All photos
GPS track
Posted by Unknown at 4:12 AM No comments: 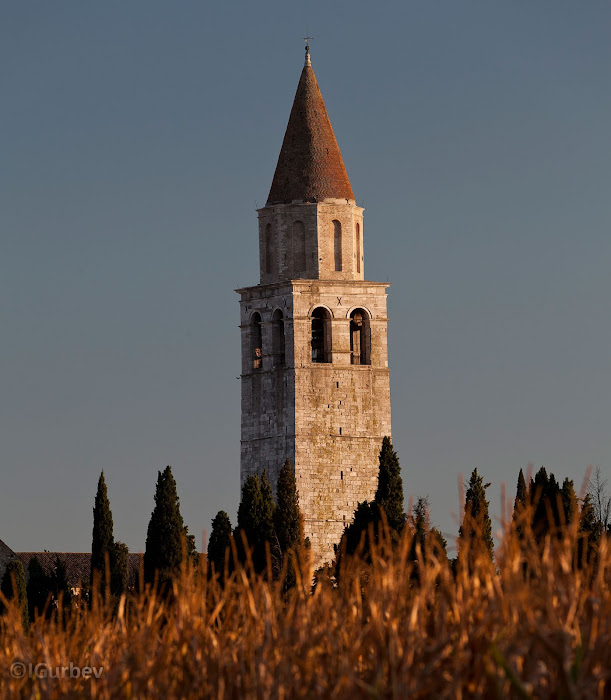 The second day, in spite of the driving, we had planned a visit to the museum of Reinhold Messner - the one in the Dolomiti - an interesting and panoramic place (600meters denivelation from the parking to the top where was situated the museum). 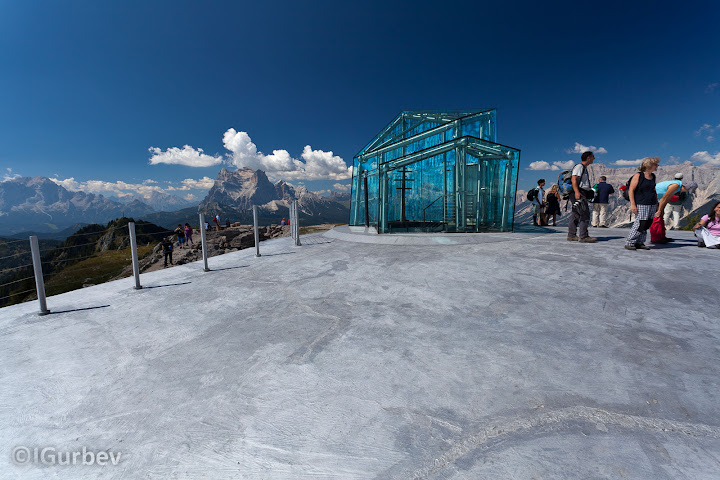 Then we drove on to Canazei, where should start our climbing part of the program. There was no free places in the first camping. Probably there was an event in town, as it was full of people and tourists and the traffic was heavy. We stayed at this camping. It was a good place with a lot of extras but the price was also good (we had to pay 18 euros for each one of us but they made a discount and we payed 15 euros).

Track from the parking to the museum

We left one dark, rainy Saturday after work in the end of September. The first day we slept in a cornfield near Kruchevatz, that we have marked beforehand. 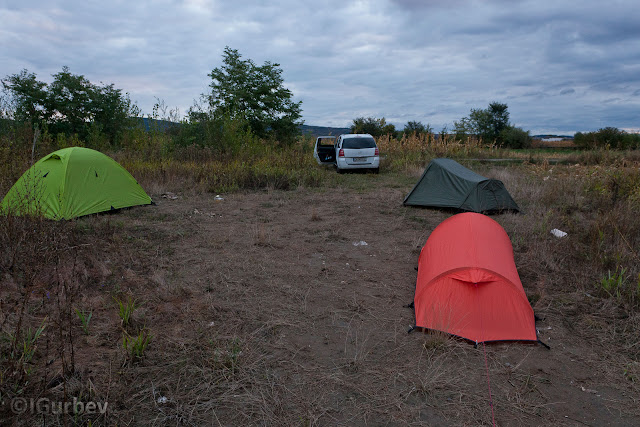 Next day, late in the afternoon we reached the village Vusanje, which seemed more as villa zone. It is situated near the border with Albania. We knew that there was a border post, where we had to register and leave the cars for more security. But it turned out that the border post was abandoned. We talked to people that we met and they assured us that it is safe to leave the cars here. But then a man showed us a house and said: "Open the door and get the car in the yard. No problem." This sounded strange to us. 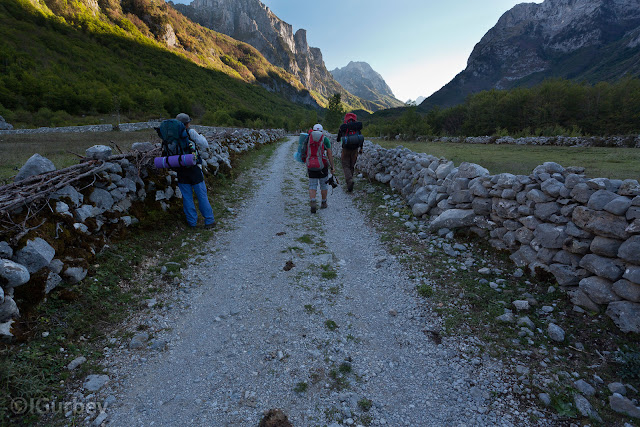 We moved on a unpaved road after the end of the village to the next border post transformed in a shieling. 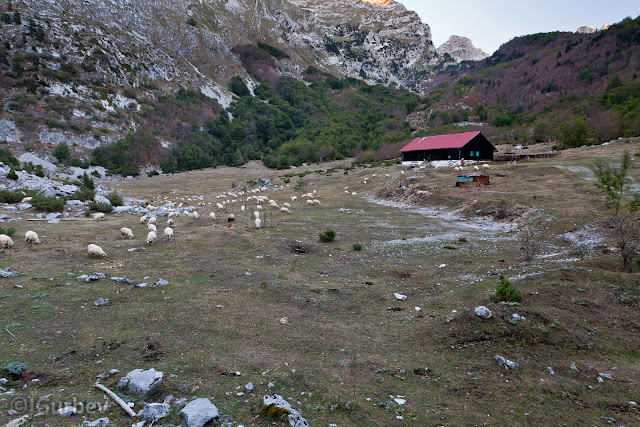 There we arrived before dark. Afterwards we had to walk 400 meters up to the lake Buni Jezerce where we considered to camp. It was amazing walking in the dark among the black silhouettes of the sharp cusps hanging over us and disappearing in the night. We pitched our tents at the upper lake which was almost empty. 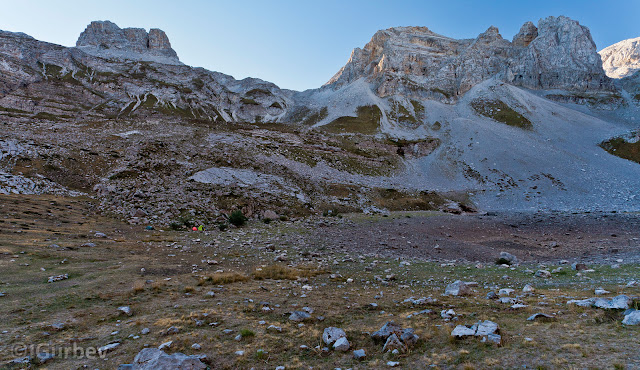 Next day the weather was fine. We hid our backpacks among the rocks and left for Maja e Jezerce. 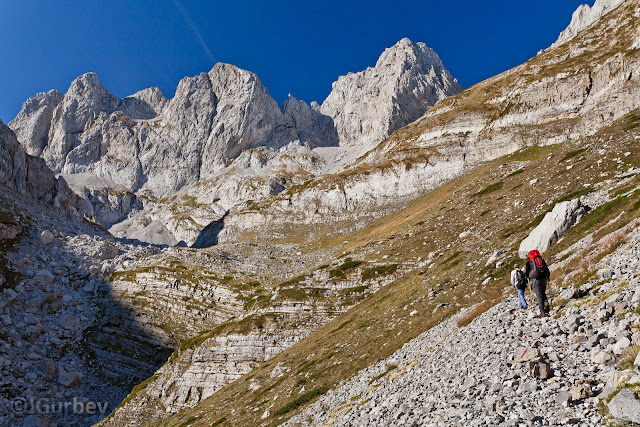 Climbing the peak was not difficult but unpleasant at places where we had to pass steep screes especially when ending with vertical cliffs. 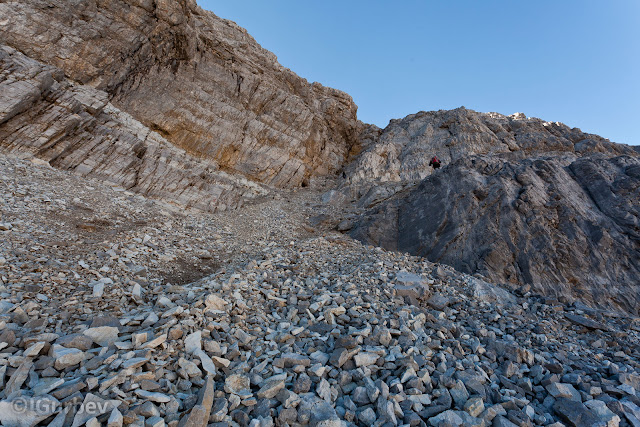 We reached the peak and went down to Vusanje of course with couple of hours walking in the dark. 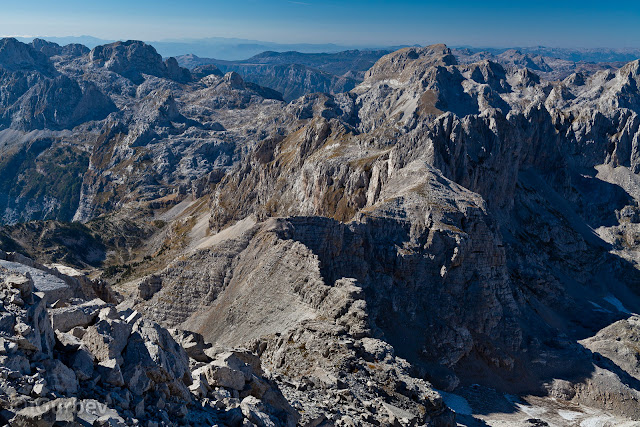 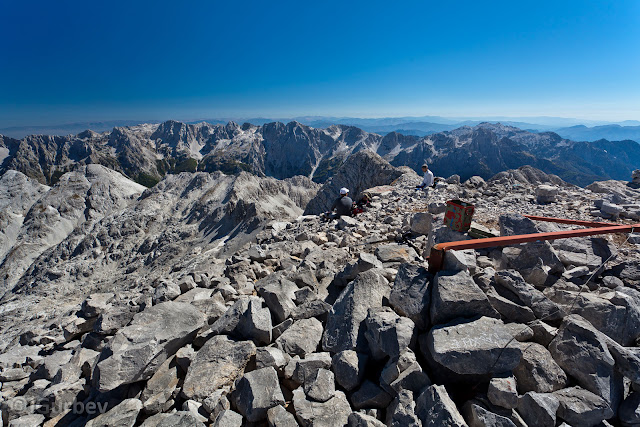 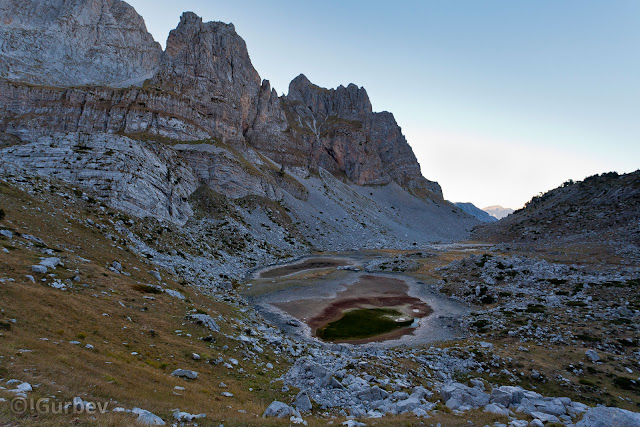 With mixed moods after having climbed Grand Paradiso, we took the decision to go in Chamonix (instead of going back to Bernina) where we had unfinished routes to do from last year. We consciously decided not to pass through the Mont Blanc Tunnel and focused south to Aosta towards the Great St Bernard Pass. There we should go in Switzerland and then in France.
Our expectations, especially mine, were rewarded- perfect roads with exceptional views and breathtaking panoramas.
And so we arrived in Chamonix. 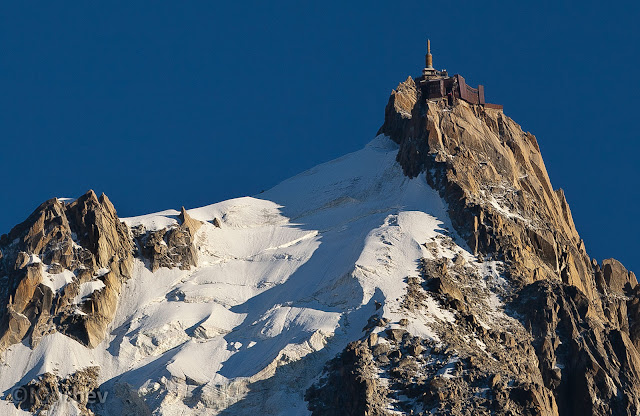 Because of a marathon competition the camping that we were last year and  should stay at  was full and only few places were left near the fence.We had to leave the cars outside the camping and carry by hands the luggage.
The route for the next day was Mer de Glace. The idea was to walk along the way of the Montenvers Train up to the panoramic site and go down on bypass. 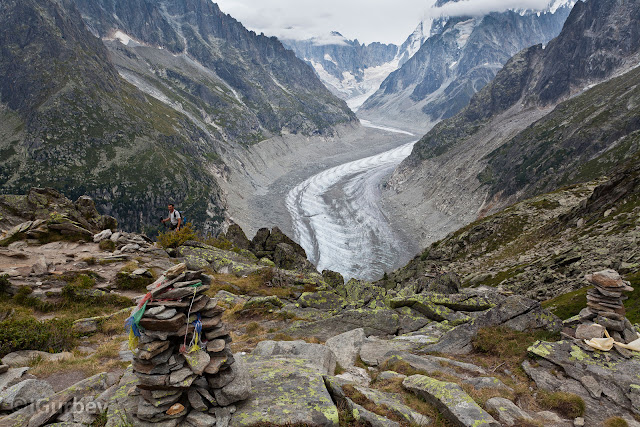 The route was very enjoyable but no good photos could be made as the sky was grey and hazy. Les Drus- Grandes Jorasses and a lot more known and unknown...

Link to all photos
Link to the GPS track

Posted by Unknown at 3:05 AM No comments:

The pictures are from the first part of our trip to Pindus (Greece) in May. 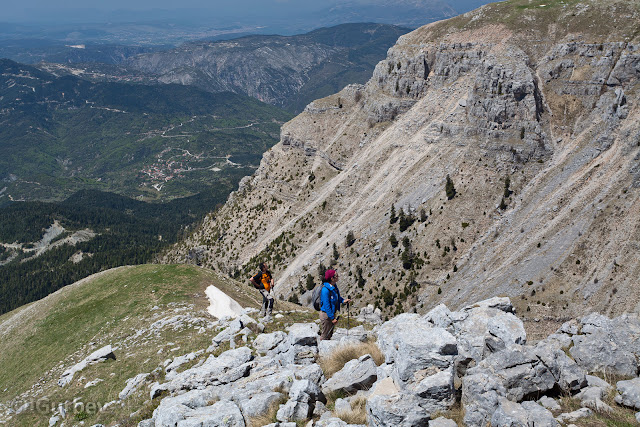 Photos
GPS track
Posted by Unknown at 3:17 AM No comments:

The same day, after Giona, we went to the village Athanasios Diakos, which had to be the departure for Vardusia. We drove on the road and the sky was black - it was going to rain. The village at first sight was sheer, tight and not very suitable for stretching tents. We still managed to find two meadows among the houses, but left them for later on and kept on searching along the road. We were lucky and after a few kilometers we came across an unpaved road with signs written in Greek and only could guess that the first one was the name of the peak and the second was meaning "hut". We made our camp at the beginning of the road. 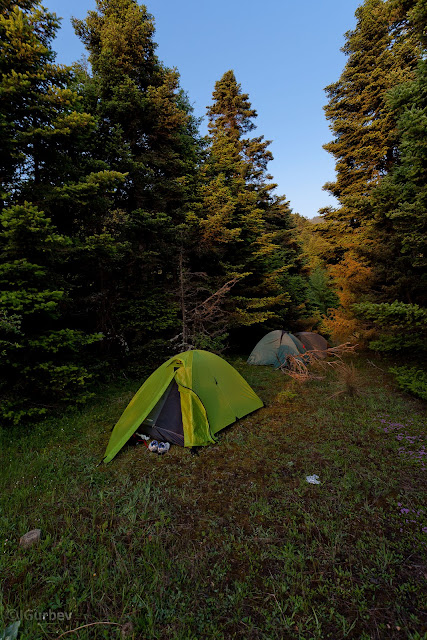 The next morning the weather was still the same - a clear sunrise on a clear sky, which very soon became again dark and cloudy. We went on by car till the end of the forest and even more up to 1600 meters. 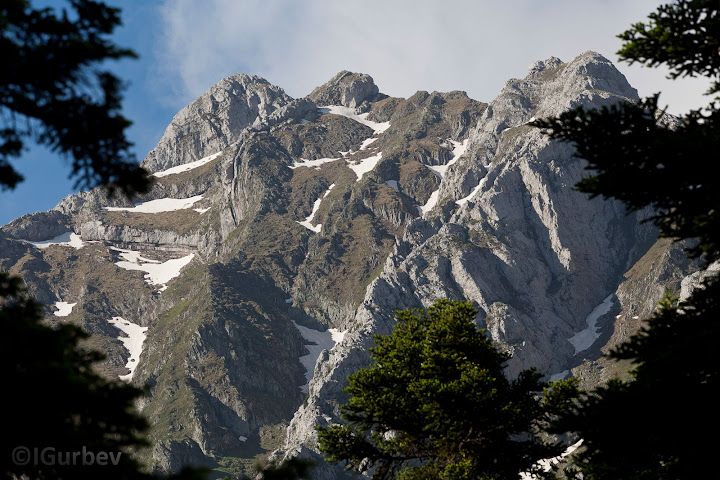 Here I don't want to go into details, but after some complicated maneuvers, we decided to drive towards Peloponnese. It was noon.
Here is the route:


We drove south. The roads here are not very good. We passed the Rio-Antirrio bridge and arrived at Peloponnese. 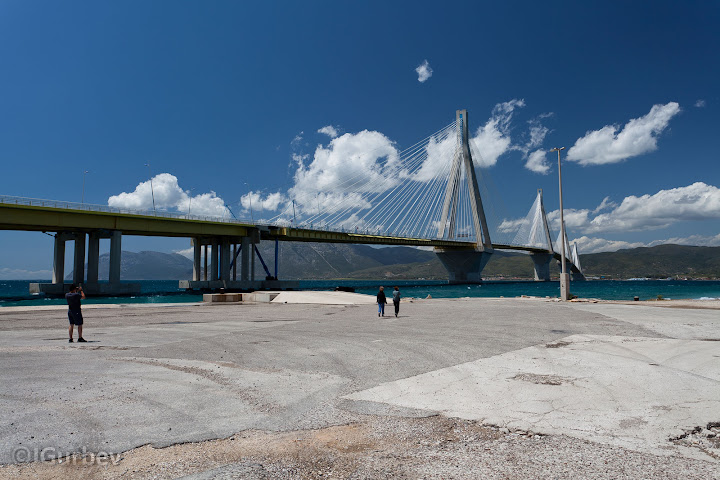 Then we took the highway to Athens. Before Athens we transitioned to another highway to Tripoli. Soon we left it and late in the afternoon we were at the foot of Taygetos. 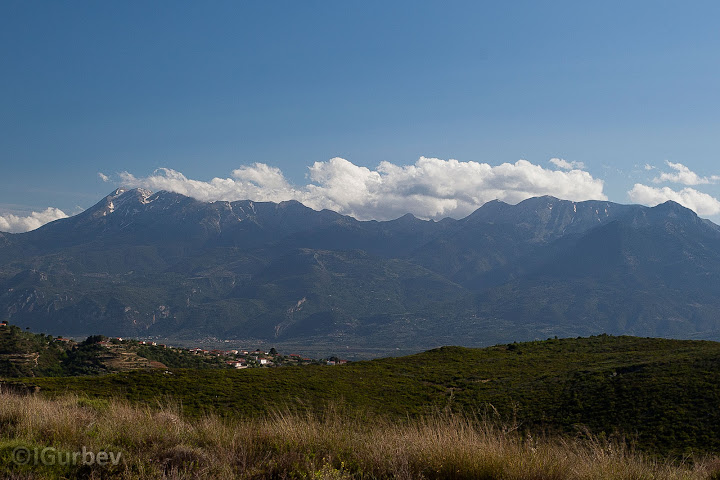 We bought a map from Sparta and drove on to the inside of the mountain. We had to find a way to the hut from where we had the track to the peak with the common name Prophet Ilia. The clouds were moving fast in the sky and the wind was brutal. At first the road was good and then from an extension with drinking water and benches started a unpaved road from where the markings to the hut and the peak begun. The marking was perfect. 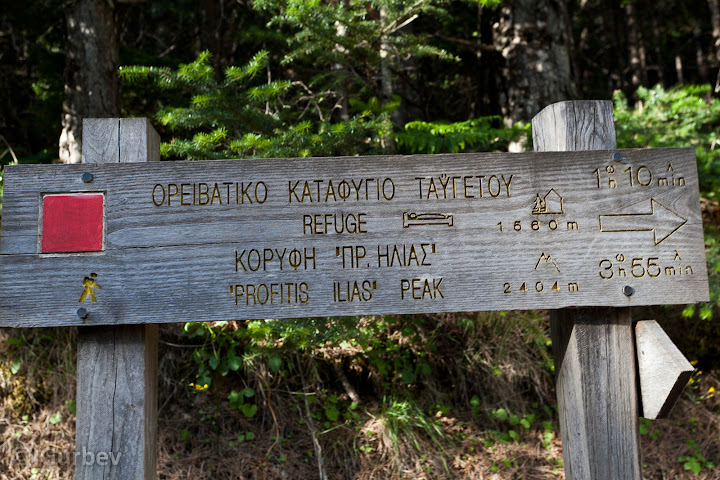 We moved on a little bit more with the cars until we found a good and flat place for the tents in a pine forest.
The rest of the story in photos:

GPS track
Posted by Unknown at 3:15 AM No comments:

The consecutive travel to Greece was the central part with the idea to go south to Peloponnese. We had to start with the mountain Giona and its highest peak Piramida. (The last one on the right on the picture.) 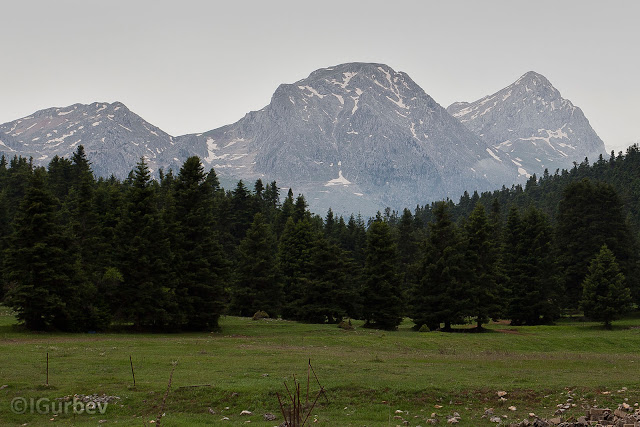 The distance was 600 km on the highway to Athens and the driving was nerve-racking with the speed restriction of 50 km.

View Larger Map
Fortunately we did well with the orientation. Over the village Kaloskopi (the point of departure) we carried on driving until we found a good place for camping with drinking water nearby and so we saved about 6 km of walking. 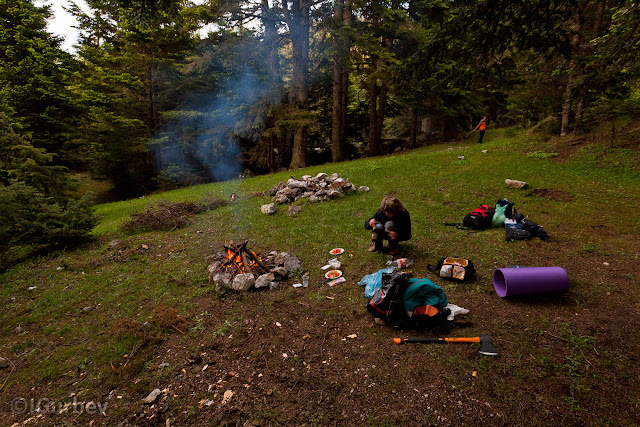 The next morning we woke up with a beautiful red sunrise and a clear blue sky, but only exactly in ten minutes all changed and became dark and half an hour later started to rain.
After having climbed the steep hills Piramida showed up gorgeously. 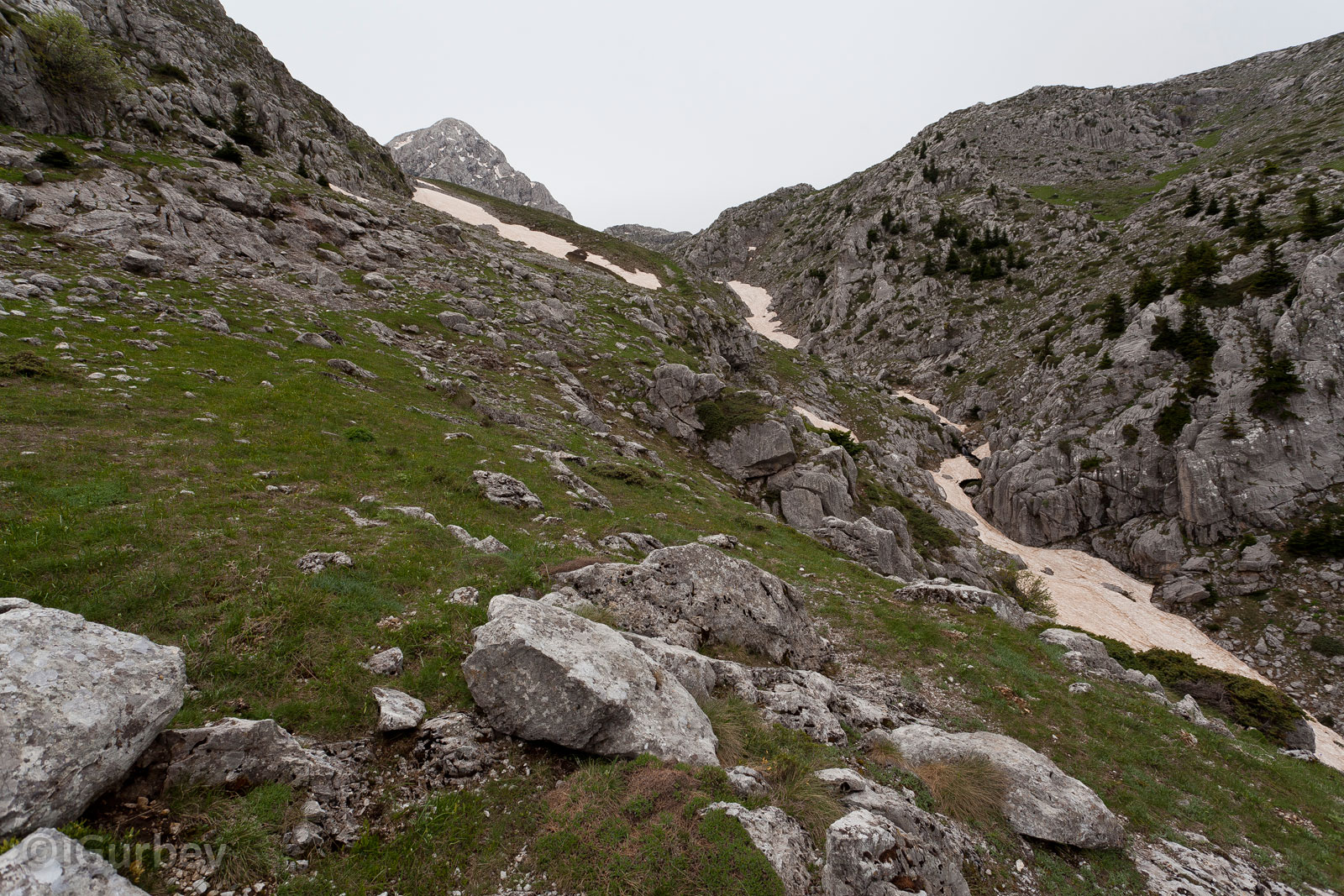 Looking up from the valley, it didn't seem that the rock is standing 700 m above us, but it was so. 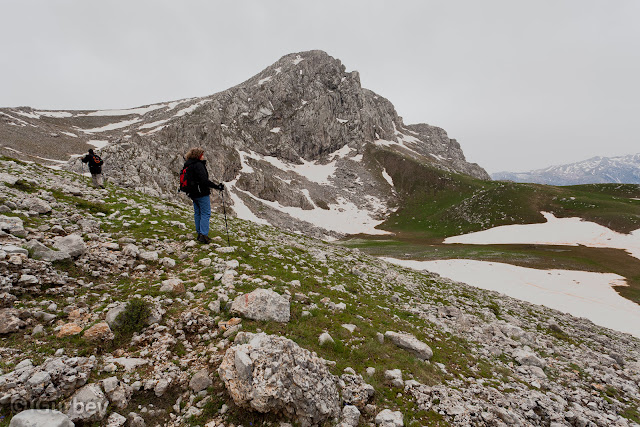 The path led us to a saddle east of the peak. A hut was seen bellow us. In the distance the sea bays. 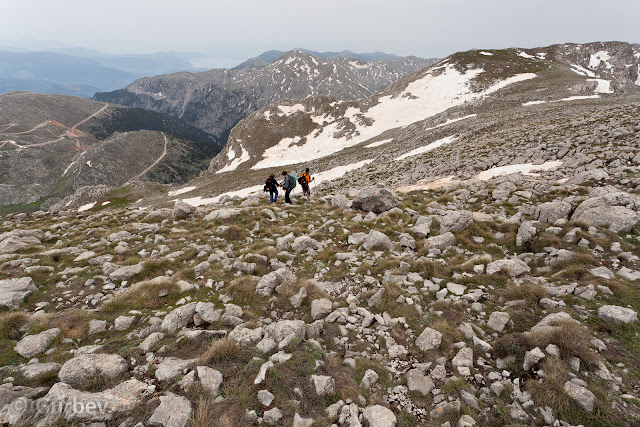 During the whole walking the weather was not stable and just about to start raining, but we got away with it. From the peak we looked over the near mountains, including Vardusia, which was our aim for the next day. 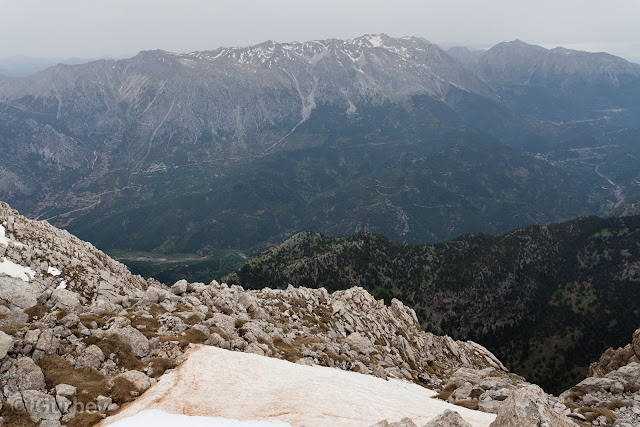 After Taiguetos and after one dud try (because of the rain) to climb up to the top of the mountain Erimantos, we returned to the idea of Vardusia.
Our trip was almost so:

We managed to reach Korakas and to examin the area, although the cloudy weather prevented us and impoverished us from views. But still we saw more than enough to understand that there is quite a lot to do in this mountain. 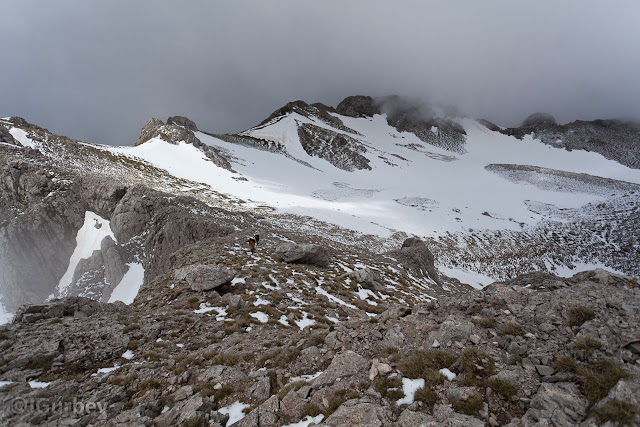 Here is the rest of the story in pictures:
All photos: